The purpose of this blog is to document the history of the Almeda Fire. To protect contributors, we have intentionally not allowed comments. To submit a story or to comment please email us at towninflames@gmail.com
El propósito de este blog es documentar el incendio de Almeda. Para proteger a quienes han contribuido, nosotros no hemos permitido comentarios en el blog. Para enviar una historia o comentar, envíenos un correo electrónico a towninflames@gmail.com
On September 8, 2020, a fire was started at the North end of Ashland, Oregon, on a street named Almeda.  Sixty-mile-an-hour winds blowing from the South over Southwestern Oregon drove flames along the vegetation on both sides of Interstate 5 and Pacific Highway.  Like numerous other wildfires that have plagued the drought-stricken states in Western United States, the September 8th fire destroyed homes, businesses, animals, and plant life in its path from Ashland to Medford, crippling the heart of Talent and Phoenix, Oregon.  The Talent Historical Society has collected the following personal accounts, photos, artwork, and links to news articles with the goal of preserving and acknowledging the amazing stories of those who survived, the resilience of those who lost everything, and the compassionate response of the community to those affected.  Our purpose is not only to preserve history but to learn how to respond to future disasters and bolster the hope of healing and restoration.
Note: All stories and photos that appear on this blog were contributed with the intention to publish on the blog and in the Talent Historical Society's up-comming book documenting the Almeda Fire.
at July 31, 2022 No comments:
Email ThisBlogThis!Share to TwitterShare to FacebookShare to Pinterest

On 9/8/20 at 1:30 pm we had a knock on our door in the Anjou apartments in Talent and were told to LEAVE NOW! We knew there was a fire in Ashland but did not know it was coming our way RAPIDLY! We grabbed a few things (for some reason both my sister and I grabbed an extra pair of shoes, but not much else) and left with the clothes on our backs. We were caught in intense traffic, taking quite some time to get to Medford. We went to the library to use the computers so we could let friends and family know what was happening.

Not realizing the seriousness of what was happening, we decided to treat ourselves to dinner at Porters before finding a room for the night. We still didn’t clue in when our waitress had to leave to go rescue her kitty in Phoenix, as she was under an evacuation order. As we were leaving, we realized Porters was closing so staff could go home. Still, we nonchalantly headed to Central Point where we knew there was a Holiday Express. However, they were full and we were told there was nothing available until Roseburg. It began to register with us that things were very serious.

We had heard people were being told to go to Expo and that was close, so we headed there. Expo was being set up as a shelter. After parking, we wandered around. There was food and water available. We “slept” (not much) in our car that night but found out the next day we could get cots. They had breakfast and lunch for us. We secured a couple cots (blankets provided), but a fire was now threatening the Expo and we were advised to leave. Life had become downright scary now.

We headed north with a herd. I had heard there was a shelter being set up at the fairgrounds in Grants Pass, so we went there. When we got there, they sent us to Parkway Christian church. They were setting up a shelter in their parking lot with cots. We slept that first night on cots outside with bedding provided, but it was pretty chilly. They moved us inside to a gym the next day because the smoky air was becoming hazardous. These folks were amazing! They provided three meals a day to everybody (including some homeless who wandered in) and bedding, toiletries, showers, and vouchers for clothes at Goodwill.

We now realized that our home may have burned. The reports about Talent and Phoenix were horrifying. A friend of mine, in Ashland, got in touch and offered us a place to stay, but she couldn’t provide for us until Sunday. Parkway was closing the shelter as they found spots for everyone, so the Pastor and his wife took us to their home for Saturday night and fed us!

Meanwhile, our brother (who lives in North Carolina) had managed to find out that Anjou had been saved and we got in contact with management there. We couldn’t go home yet, but HOME EXISTED! We went to my friend’s on Sunday and were able to stay there until we could get back to our place the following Friday. After five days in shelters and 5 days at my friend’s, we drove to Talent to find Anjou standing with devastation all around.

Every time I pick something up in our apartment, I can’t help thinking how close it came to being burnt. This feels like not only a major lesson in IMPERMANENCE, but also a huge reminder of the kindness of strangers, the caring of family and friends, and how we need to help each other and take care of our planet.

Whenever we go anywhere now, we witness the devastation others are facing. At least WE have a place to live, but the loss all around us remains stark and heartbreaking.

at July 19, 2022 No comments:
Email ThisBlogThis!Share to TwitterShare to FacebookShare to Pinterest 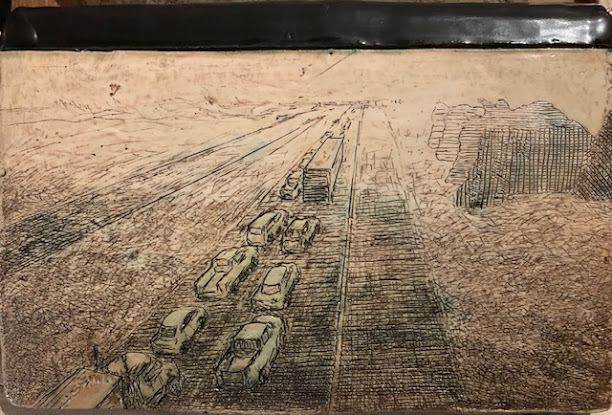 at July 18, 2022 No comments:
Email ThisBlogThis!Share to TwitterShare to FacebookShare to Pinterest


at July 18, 2022 No comments:
Email ThisBlogThis!Share to TwitterShare to FacebookShare to Pinterest

So, my mom and dad went to Winco. Me and my sister were going to stay home. I was going to take a shower. Then, I heard pounding at the on my front door! We didn’t open the door because we were afraid it was somebody mean. So, we called our dad. Dad used his phone to check our security camera. Dad saw it was the manager at the door.  By that time, the manager had already left.

My mom got a call from a friend from work. The friend said that there was somebody knocking on your door. So, my dad drove really quickly back from Winco.

My sister told me to sit down and she would tell me if something bad was happening. My sister grabbed my dog and told me, “nothing is happening.” But really, there was a whole bunch of smoke. I stood up and screamed, “Look! LOOK!”

I saw smoke and flames 3 feet from our house!! Dad and mom got home and started packing stuff. They said, “just get in the car.” I only grabbed my pajamas and the clothes I was wearing. We drove to pick up my cousins: Lily and Lixandro.

I was quiet but scared. I went with my uncle to Medford. We were going to sleep there but another fire came to Medford, so we drove to Ashland. It was calmer in Ashland. Then we went to a big house. We slept there. In the morning the sky was gray but the sun was red. We found out everything was burned and we were so scared, but that wasn’t true. Thank God our home didn’t burn down. We saw videos of the fire and saw things exploding. Important engines of my dad’s burned and were destroyed. The gasoline exploded too.

at July 17, 2022 No comments:
Email ThisBlogThis!Share to TwitterShare to FacebookShare to Pinterest 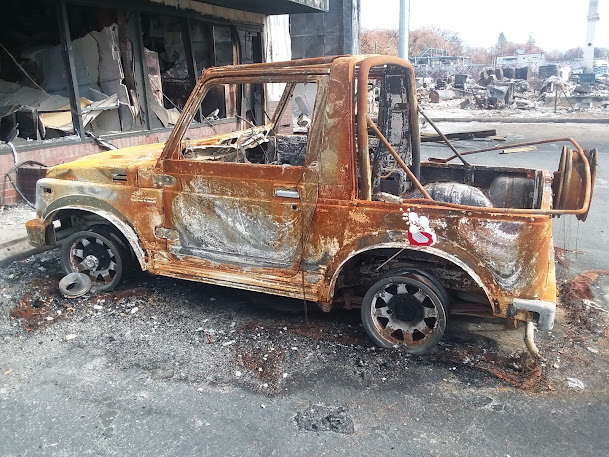 Photo courtesy of Debra Moon
at July 17, 2022 No comments:
Email ThisBlogThis!Share to TwitterShare to FacebookShare to Pinterest

La Historia de Brisa Sobre Su Experiencia con el Fuego En 8 de septiembre del 2020, me desperté, desayuné recuerdo que era el cumpleaños de mi hermana, nos pusimos a ver la tele, mi mama estaba afuera y después salí a ver a mi mama, cuando salí vi mucho humo y mi mama nos dijo: “NOS TENEMOS QUE IR INMEDIATAMENTE!!!” “NOS TENEMOS QUE IR INMEDIATAMENTE!”
Entramos a casa y empacamos un poco, nos subimos en el carro mis hermanas y mi mama manejaba. Fuimos por mi papa a su trabajo. En el camino vimos fuego, muchos carros, humo. Me sentía muy triste al dejar mi casa. De ahí fuimos a un lugar muy lejos y ahí nos quedamos en la noche y al día siguiente fuimos a ver nuestra casa que ya no estaba ahí. Me sentí muy triste y frustrada porque perdí mis cosas, lo que más extraña es mi cama, mis juguetes y mi trampolín.
Brisa’s Story about Her Experience with the Fire On the 8th of September 2020, I woke up and ate breakfast. I remembered that it was my sister’s birthday. We started to watch television. My mom was outside, and I went outside to see her, when I saw a lot of smoke and my mom said, “WE HAVE TO LEAVE IMMEDIATELY!!! WE HAVE TO LEAVE IMMEDIATELY!” We went into the house and packed up a little, then we got in the car with my sisters and my mom was driving. We went to get my dad at his work. On the road we saw fire, many other cars, and smoke. I felt very sad to leave my house. From there we went to a very faraway place and spent the night, and the next day we went back to see our house, which was not there.
I felt very sad and frustrated because I lost all my things. What I miss most is my bed, my toys, and my trampoline.
at July 16, 2022 No comments:
Email ThisBlogThis!Share to TwitterShare to FacebookShare to Pinterest
Older Posts Home
Subscribe to: Posts (Atom)

The purpose of this blog is to document the history of the Almeda Fire. To protect contributors, we have intentionally not allowed comm...