A conscientious plan for evacuation was always in place at the shelter with drills and education for receiving animals. However, the threat of a fire within the facility, and the need for removal of animals in the shelter was not in place.

At about noon on September 8th, a call went out that the fire was approaching the facility. At 12:10 the electricity went out in the building, and Field Officer, Andy Swanson, concluded that they in fact had to evacuate all animals to the Expo in Medford. With limited vehicles, volunteers were transporting crated dogs and cats in their own cars and trucks. There were 36 cats and 56 dogs in crates. Five or six animals in quarantine had to stay at the facility.

To add to this dilemma, Highway 99 heading north was heavily congested. There were several contributing factors: Fire was engulfing Interstate 5 on both sides beginning at exit 19 (south of Talent); traffic was evacuating from Talent, causing great congestion. The wait to get away from the fire was intense.

A single line of fire advancing northward was the biggest threat to the shelter—it was heading toward, and possibly surrounding, the shelter area. The maintenance man, Tim, at the shelter had thankfully turned off the gas. Field Officer, Andy Swanson, actually stayed at the facility from 8 pm until about 3 am the next morning, using the hose at the building to keep the roof, trees and the building structure safe from the flames.

At the Expo, along with humans, the outdoor arena was used for animals. Kim Casey, the shelter’s program manager, stayed at the Expo for nine days. In addition to the animals in the shelter, other pets and livestock were evacuated to the Expo. There were rabbits, birds, goats, chickens, llamas, pigs, and cows. There were also rodeo animals: bucking horses, 36 cutting horses, and 3 unidentified horses. Twenty-eight thousand pounds of animal food was consumed at the Expo from September 8th through the 21st. The animal rescue was a remarkable event made successful by amazingly devoted people working together.

In the aftermath of the fire and rescue, two vans were donated to the Jackson County Animal shelter for use in future emergencies. 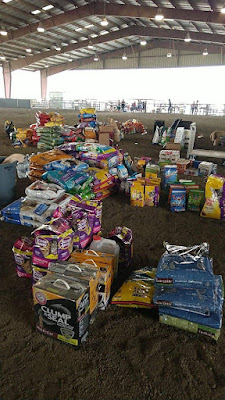 at April 27, 2022
Email ThisBlogThis!Share to TwitterShare to FacebookShare to Pinterest

New comments are not allowed.

On September 8, 2020, a fire was started at the North end of Ashland, Oregon, on a street named Almeda.  Sixty-mile-an-hour winds blow...